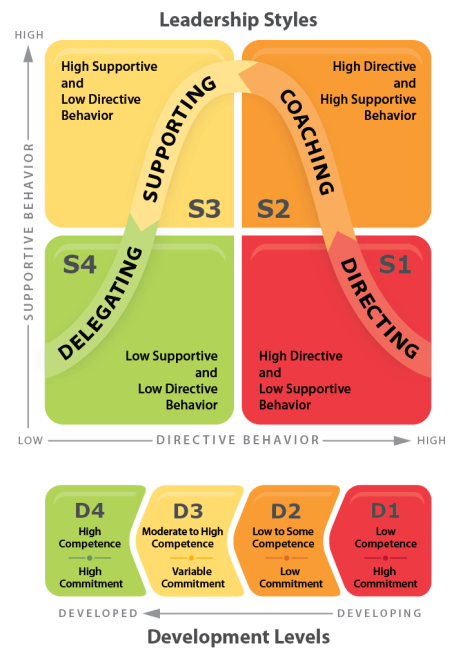 “Oversupervising or undersupervising—that is, giving people too much or too little direction—has a negative impact on people’s development. That’s why it’s so important to match leadership style to development level” (Blanchard, 2010, p. 76).

I was eating at a sandwich shop about a week ago. It was still too early for lunch but since I was hungry and they happened to be opened, I went inside. The staff was busy preparing for the busy day and, even though they weren’t officially opened yet, they allowed me to go ahead and placed my order since I was using a credit card.

I got my sandwich and decided to sit and eat inside the restaurant. While I was there, the manager was busy talking to a visitor (from what I could gather, it sounded like an interview). At one point, one of the staff informed the manager that they were expecting a huge order of sandwiches and that she would need his help in order to get all the orders prepped and ready for delivery.

The manager quickly told the employee to just do it by herself. This brought up feelings of anger and resentment from the employee, as evidenced by her yelling at the manager:

“You’re a f***king, a**hole! I’m just one person and you expect me to do everything by myself and it’s not fair!”

Noticing that there was one customer in the restaurant (me), the manager quietly shot back, “It’s your job so just do it.”

As I headed out the door, I looked at the young lady and wished her a nice day. Of course, that was too late at that point because her entire day had been ruined because of this very poor interaction with her supervisor.

Obviously, no direct report or employee should ever talk to a manager in that manner or vice versa. But their interactions reflected at least three things. First, it tells me that this is not the first time that the employee has been allowed to speak like that. Second, it demonstrates that the manager uses a command and control style of management, wherein he (the boss) barks orders and expects his staff to just do it. In this manager’s mind, he’s the boss, he tells his staff what to do, and they carry out his orders. Third, and finally, it shows that the manager only uses the one leadership style that he knows to lead and manage his staff.

In Leading at a Higher Level (2010), Blanchard and his co-authors wrote (p. 76), “To bring out the best in others, leadership must match the development level of the person being led.”

In the Situational Leadership II model, there are two dimensions to leadership style:

Effective leadership occurs when leaders match their style to the competence and commitment of the followers. Effective leaders are those who can recognize what followers need and then adapt their own style to meet those needs. For individuals at

There are four leadership styles: Directing, Coaching, Supporting, and Delegating. Each style is a different combination of directive and supportive behavior.

To determine what is needed in a particular situation, a leader must evaluate her or his followers and assess how competent and committed they are to perform a given goal. Based on the assumption that followers’ skills and motivation vary over time, situational leadership suggests that leaders should change the degree to which they are directive or supportive to meet the changing needs of followers.

Diagnose Development Level: The employee is most likely at the D2 or D3 level. She is fairly to moderately competent but struggles with her commitment.

Match Leadership Style: We arrive at two recommended leadership styles that the manager could have used to interact with her:

The employee might be at the D2 level, wherein she is somewhat new and although she knows the basics, she still is unsure about her own abilities to master the other skills to be successful in her role. If this is the case, she would need a coaching leadership style that is high on direction but also high on support. The manager will want to “provide a lot of praise and support at this stage because you want to build [her] confidence, restore [her] commitment, and encourage [her] initiative” (Blanchard, 2019, p. 59).

The employee could be at the D3 level, in which she knows her day-to-day responsibilities well but sometimes doubts herself and questions her own ability to perform on her own without needing the manager’s help or the support of others. For employees at the D3 level, the manager should use an S3 (Supporting) leadership style, wherein the manager will support her efforts, listen to her concerns and suggestions, while also being there to support her. The manager will encourage and praise but not direct, since this style is more collaborative (Blanchard, 2019).

Partnering for Performance: Blanchard’s Situational Leadership II (SLII®) emphasize the importance of the manager aligning with his/her direct report for performance. Blanchard calls these alignment conversations, “where you agree on goals, development level, and leadership style.” Be sure that your employees understand and know what you are doing when you try to match your leadership style to their development level and what agreement has been made between the manager and employee about what needs to be done and when (Blanchard, 2019).

In command and control, “the manager tells us what to think and do, while partnering for performance suggests that how we achieve the vision is left open for discussion and input by everyone involved” (Blanchard, 2019, p. 40).

In determining what style to use with what development level, just remember that, “Leaders need to do what the people they supervise currently can’t do for themselves” (Blanchard, 2019, p. 57).

Caveat #2: The manager at this particular sandwich shop did not know how to use any other style of leadership other than directing. And even then, he was terrible at it. However, with the proper training, he can be taught the different development levels and leadership styles, and can learn (with practice) how to match his newly learned leadership style to the employee’s development level on a specific goal or task. Only after that can he then have alignment conversations, where both he and the employee will agree on the expected performance behaviors and goals.

Caveat #3: “Just as leaders must move from command and control to a partnering relationship with their people, so too must those who are being led move from ‘waiting to be told’ to taking the initiative to lead themselves” (Blanchard et al., 2019, p. 70).

Let’s return to the employee and manager at the sandwich shop. Although we would want the manager to learn the skills to be adaptable in leading and managing the employee (i.e., diagnose development of employee, match leadership style, partnering for performance), the onus is also on the employee to become empowered, and learn to be more self-directed and self-lead so that she is not constantly looking to or asking the manager for directions.

“If empowerment is to be successful, organizations and leaders must develop self leaders in the workforce who have the skills to take initiative” (Blanchard, 2019, p. 70).

“All people have peak performance potential—you just need to know where they are coming from and meet them there” (Blanchard, 2019, p. 65).