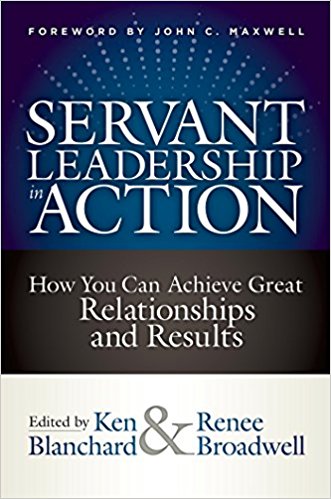 I wasn’t sure if this would be the kind of book I would enjoy or find value in because it’s a collection of essays. But the topic of servant leadership has been top of mind for me for the past few years, so I thought I’d give this book a chance and hopefully glean some useful information about servant leadership and its application to the workplace.

Greenleaf’s thinking was inspired by and made clear in the 1960s thanks to a short novel called Journey to the East by Herman Hesse. It’s a story about Leo, a servant who accompanied a group of people on a spiritual quest. Everything was fine until Leo disappears, which then led to the group falling apart and the journey abandoned. The people in the group learned that they couldn’t make it without the servant. After years of searching, the story’s narrator finally locates Leo and finds out that Leo, whom everyone had thought to be a servant, was, in fact, the head of the religious order that sponsored the original journey (Spears, 1998).

“After reading this story, Greenleaf concluded that the central meaning of it was that the great leader is first experienced as a servant to others, and that this simple fact is central to his or her greatness. True leadership emerges from those whose primary motivation is a deep desire to help others” (Spears, 1998, p. 4).

I thought a background explanation about servant leadership from Blanchard in the first essay (“What Is Servant Leadership?”) is important:

“Once people are clear on where they are going, the leader’s role shifts to a service mindset for the task of implementation—the second aspect of servant leadership. The question now is: How do we live according to the vision and accomplish the established goals? Implementation is where the servant aspect of servant leadership comes into play” (Blanchard & Broadwell, 2018, p. 9-10).

I am not a huge fan of edited books because the ones I’ve come across do not gel well together. Edited books can be messy and difficult to read when different authors and writing styles are thrown together with no editorial oversight to ensure consistency in tone and/or message. I was pleased to see that this didn’t happen with Servant Leadership in Action. The editing was well done and reading the chapters, written by different authors, felt seamless, almost as if written by the same person. This is no easy feat to achieve and I commend Blanchard and Broadwell for the great job co-editing this book.

In her essay, “Treat Your People as Family,” Colleen Barrett wrote about the incredible impact that servant leadership had on the 40+ years of success at Southwest Airlines. Admittedly, she shared that they didn’t know until much later on that it was called that. “But while our recognition of the term Servant Leadership might have come late, for over four decades Herb and I have said that our purpose in life as Senior Leaders with Southwest Airlines is to support our People. To us, that means treating People as family” (Blanchard & Broadwell, 2018, p. 183).

Colleen recalled a fabulous story that one of Southwest’s new leaders told her about his best example of a servant’s heart, which he saw Herb Kelleher (founder of Southwest Airlines) model.

“He watched Herb talk to a Mechanic in worker’s clothes for at least fifteen minutes—even though there were literally hundreds of People circling Herb for his attention. Herb never looked over the guy’s shoulder to see who else might be there, and never diverted his eyes from this man while they were talking. Herb was courteous to everyone who was trying to shove the guy out of his space so that they could fill it, but he gave this man his time. It was clear to this new Leader that Herb had no hierarchical concerns—he was completely interested in what the Mechanic was trying to tell him. That had a profound impact on this Leader, and he remembers it to this day. He has been with us more than twenty years now” (Blanchard & Broadwell, 2018, p. 187).

In Cheryl Bachelder’s “Serve the People” essay, she shared about the transformation at Popeyes Louisiana Kitchen, from a struggling brand and company to a prosperous enterprise. I really like what Cheryl wrote:

“When this story began, we didn’t know it would be servant leadership that drove success. We didn’t have a plaque in the office that stated our purpose and principles. What we did have was a team of leaders who were willing to focus their passion and ambition on the success of the people and the enterprise before their own interests” (Blanchard & Broadwell, 2018, p. 230).

From 2007 to 2016, under Bachelder’s leadership, Popeyes flourished, “with restaurant sales, profits, and unit growth rates that were the envy of its competitors” (Blanchard & Broadwell, 2018, p. 230).

In his essay (“Leading is Serving”), Dave Ramsey shared the lesson he taught his teenage son about the heavy responsibility of being a servant leader. Ramsey explained to his son (as they were walking toward Dave Ramsey’s company’s picnic) that as president and CEO of the company, he bears the responsibility to not just the employees of his company (the adults) but also to those employees’ children (the 97 kids seen running around the picnic): “Those kids’ parents make a living, have a future, and those kids have a future partly because of how I act. If I misbehave in my personal life, if I fail in areas of integrity, if I screw up, it will mess up a ton of lives. As a servant leader, I understand that I am at least partially responsible for those little kids” (Blanchard & Broadwell, 2018, p. 197).

Ramsey took it a step further. He told his son that, even as a teenager, the son also bore the responsibility of being a servant leader, that “if he went out and acted crazy, he could impact those kids’ lives” (Blanchard & Broadwell, 2018, p. 197) too. For instance, if the son were to get drunk, drive, and kill someone, the family would get sued and some of the employees working for his dad’s company might have to be let go. “As my son, he gets to enjoy the benefits of our success, but he also shares in the responsibility of servant leadership. He needed to know, even as a teenager, that the decisions he makes and the actions he takes have an impact” (Blanchard & Broadwell, 2018, p. 197).

Some of the essays really touched me. One such essay was by Phyllis Hennecy Hendry (“A Lesson From My Father”) about how her father, a pastor, taught her, when she was eight years old, “the simple act of caring for someone and how serving people changes everything—literally” (Blanchard & Broadwell, 2018, p. 117). She recounted the many Saturday morning visits to the home of “a crotchety old man” (Blanchard & Broadwell, 2018, p. 116) whose “wrinkles met in odd places around his face” (Blanchard & Broadwell, 2018, p. 116) and how you can serve and meet people where they’re at. The simple and consistent act of visiting this grumpy old man every Saturday morning eventually led him to change his crabby ways — smiling a lot more and hugging them, and eventually introducing both Phyllis and her father to others as his “good friends.” The essay was about how this old man came to accept Jesus, but the way Hendry told the story, through the eyes and experience of herself as an 8-year-old girl, made it very powerful and its servant leadership lesson applicable in many areas.

Jon Gordon shared an emotional story in his essay (“Little Things and Big Things”) about his late mom making a sandwich for him even though she was tired and, unbeknownst to him, was battling cancer:

“Looking back, I realize she wasn’t just making me a sandwich. She was showing me what selfless love and servant leadership were all about. At her funeral, many of her real estate clients and colleagues came up to me and shared countless stories of all the selfless acts of love my mom did for them as well . . . We often think that great leadership is about big visions, big goals, big actions, and big success. But I learned from my mom that real leadership is about serving others by doing the little things with a big dose of selfless love” (Blanchard & Broadwell, 2018, p. 134).

Rico shared a great story and perfect example of what it is to live a servant leadership mentality and culture:

“One of the company’s division vice presidents (DVPs) had been recognized two consecutive years at the annual managers’ meeting and seemed to build good relationships with his employees. He achieved impressive results and spoke like a servant leader when talking with senior leadership. Everyone thought he was a good servant leader—everyone but his employees. In their servant leader surveys, they described a very different manager—one who was egotistical and hypocritical” (Blanchard & Broadwell, 2018, p. 236).

When that division vice president’s true character came to light, Rico recounted that Ron Mittelstaedt, CEO and Founder of Waste Connections, said this:

What I Did Not Like: In a few of the essays, I was unconvinced that the authors effectively or at least cogently tied their thoughts and previous work to servant leadership in their essays. When authors toss their writings in without fully thinking through and making a strong case for how their work connects or is related to servant leadership, then their essays came across as disorganized ramblings.

Disclosure: I received Servant Leadership in Action: How You Can Achieve Great Relationships and Results as a complimentary gift, but my book review was written as though I had purchased it.