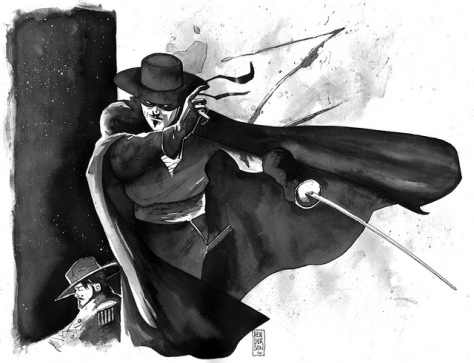 In his book, The Happiness Advantage, author Shawn Achor talks about how by first limiting our focus on small, manageable goals, we can then expand our sphere of power from there. Achor used the movie “The Mask of Zorro” (starring Antonio Banderas and Anthony Hopkins) as an example and describes what he calls The Zorro Circle. For those who have not seen it, there is a scene where young Alejandro (Zorro) is taught how to master the sword and other skills by first training in a small circle. Only after mastering control of that small circle was he then allowed by his master Don Diego to try other larger feats (e.g., swinging from ropes and fighting against his own master in a sword fight).

Achor suggests that the first goal to regaining our internal locus of control (when we don’t feel in control) is to to become more self-aware. When you’re in a high stress situation or feel a high level of stress, identify how you’re feeling and put those feelings into words. Try writing down your feelings in a journal or share with a close friend or trusted colleague. “[V]erbalizing the stress and helplessness you are feeling is the first step toward regaining control” (Achor, 2010, p. 137).

“By tackling one small challenge at a time—a narrow circle that slowly expands outward—we can relearn that our actions do have a direct effect on our outcomes, that we are largely the masters of our own fates. With an increasingly internal locus of control and a greater confidence in our abilities, we can then expand our efforts outward” (Achor, 2010, p. 137).

The lesson is this: If you focus on and master the small, manageable goals first (the small circle), you can then expand your sphere of power to larger goals. Tackle one small challenge at a time and clearly see and let go of things that you do not have control over and focus your energy and efforts on things over which you do have control.