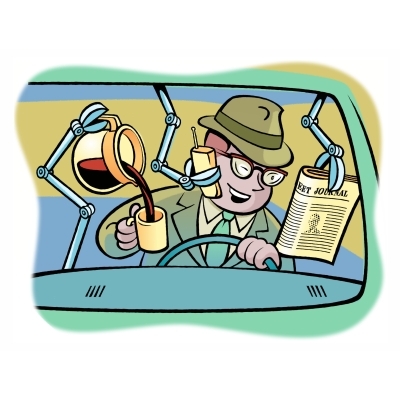 Multitasking is a word that gets thrown around a lot these days. But it’s important to understand what it is and why it doesn’t work. Multitasking is when we juggle multiple things (thoughts and actions) at the same time. For example, people multitask when they drive and talk on their cell phones (Donatelle, 2009). It may surprise you to hear, however, that people who multitask are actually less productive than those who just concentrate on one project a time.

A recent Harvard Business Review post said multitasking leads to as much as a 40% drop in productivity, increased stress, and a 10% drop in IQ (Bergman, 2010).

Perhaps no other example better illustrates why multitasking doesn’t work than distracted driving. Studies have found that driving while distracted (being on the phone or texting) is actually more dangerous than driving drunk.

Here are some eye-opening statistics:

According to Strayer, Watson, and Drews (2011) “cell-phone conversations compete for attention with driving. The result is that visual processing is substantially impaired when drivers are talking on a cell phone (either hand-held or hands-free)” (p.47).

However, not all conversations engaged in while driving are harmful. Researchers have found that in-vehicle conversations (i.e. conversations with passengers in the car) are very different from cell-phone conversations. Why? Because “the passenger often actively engaged in supporting the driver by pointing out hazards, helping to navigate, and reminding the driver of the task (i.e., exiting at the rest stop). In other cases, the conversation was temporally halted during a difficult section of driving and then resumed when driving became easier” (Strayer et al., 2011, p. 48).

Strayer et al. (2011) found those who talked on the cell phone were more likely to drift into the other lane and more likely to miss an exit. Further analyzing conversations, researchers discovered that drivers and passengers in the car tended to adjust their conversations in response to traffic cues. For instance, they both stopped talking if there was a traffic problem or the passenger would give advice to help the driver navigate. On the flip side, conversations on cell phones didn’t vary based on traffic conditions because, obviously, only the driver can see the road. “In effect, the passenger acted as another set of eyes that helped the driver control the vehicle, and this sort of activity is not afforded by cell-phone conversations” (Strayer et al., 2011, p. 48).

Finally, for those who still argue that they’re great at multitasking, research indicates that even though we think we’re “multitasking” it’s actually our brain rapidly switching from one task to another, rather than processing them simultaneously. People who seem to be good at multitasking are simply good at being faster at switching back and forth between two things (Scientific American, 2009).

University of Utah – Drivers on Cell Phones Are As Bad As Drunks
http://archive.unews.utah.edu/news_releases/drivers-on-cell-phones-are-as-bad-as-drunks/

University of Utah – Frequent Multitaskers Are Bad at It
http://archive.unews.utah.edu/news_releases/frequent-mulitaskers-are-bad-at-it/