Jumping Out Of College and Into the Pay Gap

As soon as people enter the workforce, salary figures indicate an initial gap in pay between men and women. The Harvard Business Review reports that a year after graduating from college, “the average woman earns 80% of what a man earns; however, after controlling for industry, type of job, prior experience, and other characteristics, this gap closes to 95%.” The AAUW, which derived these figures assert that the unexplained 5% gap indicates bias.

In an article in the Wall Street Journal, Carl Bialik states that one of the most common claims about the gender pay gap is that “women earn 77 cents for every dollar that men do.” However, Casey Mulligan, an economist at the University of Chicago maintains that “the gender gap would be less than 10 percentage points if you had better data and could make all the reasonable adjustments.”

Still, no matter how one looks at the numbers, there’s no denying that there IS a gap between the salaries of women and men. 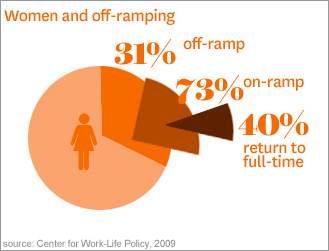 Perhaps the most eye-opening piece of all is the data on women who leave the workforce. According to the HBR article (which cited data from the Center for Work-Life Policy), 31% of highly qualified women leave the workforce voluntarily for an average of 2.7 years. When three-quarters of these women do return (about 73% later go back to work), only 40% find full-time jobs. The author concludes that “[t]aking time out – for any reason – is costly (for women).” Finally, citing research by the Center for Work-Life Policy (CWLP), the HBR article shows that women who off-ramp lose an average of 18% of their future earning power.